Hello, I'm Neil Nunes with the BBC news. In one of the worst mass shootings in modern US history, twenty people have been killed in the Texas city of El Paso. A twenty-one-year-old white man was arrested at the shopping complex where the massacre took place. Sophie Long is at the scene. Children was shopping with their parents in the Walmart behind me for a new school uniforms, school bags, stationary, all those things that family shop for this time of year just a week before school reopens when a gunman opened fire. Now people inside the store have described the scenes of chaos and panic as parents tried to find and protect their children. People desperately sought hiding places or routes out of the building. One man has been arrested and taken into custody. He has been identified locally as twenty-one-year-old Patrick Crusius from the Dallas area. Now one line of investigation that authorities are looking into is whether an anonymous white nationalist manifesto shared online claiming that this was a targeted attack against the local hispanic population can in any way be linked to the suspected gunman. Victoria Balderrama was at the shopping center with her parents when they were evacuated by the police. It's the best place. I mean I've always felt so safe and it's home. And so just the reactions, I mean. Just now it's starting to hit me all that's happened. I mean twenty people is a large number. And I mean, It's so sad to know that these people are my people. These people were targeted and it just, it breaks my heart. 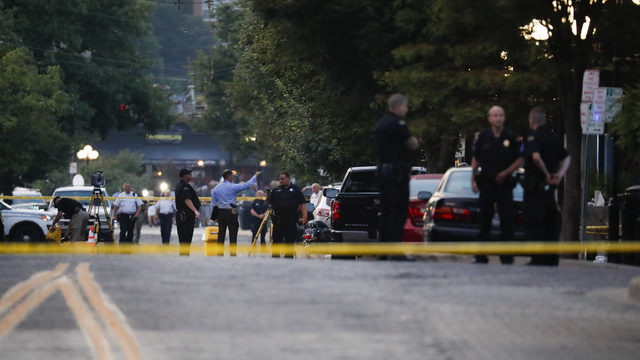 There's been a second mass shooting in the United States just hours after the killings in El Paso. Police in Dayton, Ohio say they are investigating what they described as an active shooter incident near the city center. Local media say up to ten people may have been killed and many others are wounded. Eye witnesses have been quoted as saying the gunman tried to get into a bar and opened fire outside when he was stopped. The shooter's motivation is not known.

A daredevil French inventor has succeeded in crossing the English Channel on a jet-powered hover board from the northern French coast to the southern English coast. Danny Eberhardt has more. Franky Zapata was cheered by crowds as his so called fly board lifted off near Calais. He failed in his first attempt to cross the channel last month, falling into the sea while trying a tricky landing on a boat halfway to refuel his kerosene backpack. This time, he had organized a bigger boat, and it all went swimmingly. In a futuristic scene, he was flanked by helicopters as he approached the landing spots near Dover. Twenty minutes after leaving France, he was back on terra firma. For the last five or six kilometres, I just really enjoyed it, an emotional Zapata told reporters. He said he'd leave it to others to decide whether it was historic. BBC world news.

1.Eye witnesses have been quoted as saying the gunman tried to get into a bar and opened fire outside when he was stopped.

Engel is quoted as saying that balanced people do not become artists.
引用恩格尔的话说就是理性的人是成不了艺术家的Yn1@6tGfwQt。

2.Twenty minutes after leaving France, he was back on terra firma.

After two days at sea, it was good to be back on terra firma again.
在海上度过两天之后，又回到使人觉得坚实的陆地，真是惬意

3.A twenty-one-year-old white man was arrested at the shopping complex where the massacre took place.

A new shopping complex is being built on the edge of the city.
城市的边缘地带正在建造一个新的综合性商场~I5v2r86(B#D。